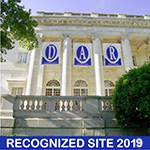 In 1983, the first chapter of the National Society Daughters of the American Revolution (NSDAR or DAR) was established in Sydney, Australia, with members from all over the country. The Captain Matthew Flinders Chapter NSDAR includes membership from Daughters who have relocated from USA to Australia and Australian native Daughters who, through their own ancestry research, discovered their connection to a patriot.
​

In 1987, the chapter in Melbourne was formed and the Captain Matthew Flinders Chapter NSDAR was formally recognized as the second chapter in Australia.

The Captain Matthew Flinders Chapter NSDAR holds quarterly meetings on the fourth Sunday in February, May, August, and November. The November meeting is a Thanksgiving meeting, with all the family and friends invited to share a traditional Thanksgiving dinner.

Currently, the chapter has selected two Australian organisations. These are the Royal Flying Doctor Services and Guide Dogs of Victoria.
Chapter contact : Please contact our regent or treasurer for information

The content contained herein does not necessarily represent the position of the NSDAR. Hyperlinks to other sites are not the responsibility of the NSDAR, the state organizations, or individual DAR chapters.
Website maintained by webmaster : NSDAR Captain Matthew Flinders Chapter, Last updated  28 March 2019